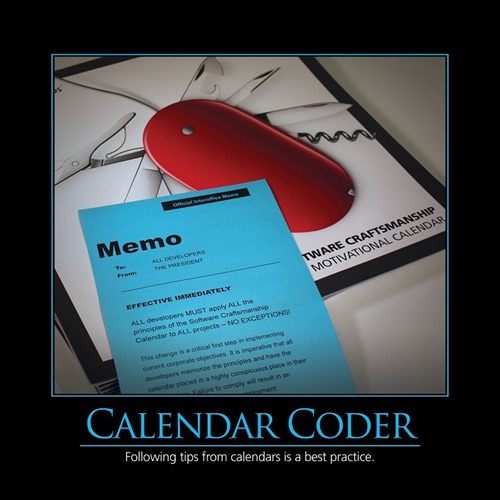 Jesse Williamson had a spectacular tweet that confirmed exactly what we were looking for when we came up with this idea.

Do you recognize from which anti-pattern we derived this one?

It’s called by many names: cargo cult, angry monkeys, etc. If you’ve ever heard the story about needing to cut the ham in half before you bake it, that’s the same story. It is the practice of following along without knowing why you’re doing something. If you read the calendar and don’t know why you should do what it says, you’re a Calendar Coder. If you learn why, agree with the reasoning, and it’s applicable to your situation, then you will want to follow what the calendar says. Don’t just blindly follow along though.

I hope everyone enjoyed the calendar. If you did, the new ones for 2013 are on sale right now.