We’ve all been there before. Our project is moving along just fine. The release date is in sight. We’re on track to get everything pushed out right on schedule. Then everything is derailed by a last minute must have new feature. Maybe it’s the differentiator that will raise your product out of the crowd. Perhaps it’s just one small feature that will only push back the release by a day or two. When you’ve finished that one, however, will you have any additional must have features?

This is called Feature Creep. It’s when new features get added to the scope, and often, these features will cause delays in the project.

The NimblePros 2012 Software Craftsmanship Anti Patterns calendar for the month of July is about Feature Creep. So for the month of July, make sure that you watch to make sure that your scope is not ever increasing and pushing off release dates. Shipping is a feature, and your product should have that feature also. If you keep pushing off the release date, it will never ship. 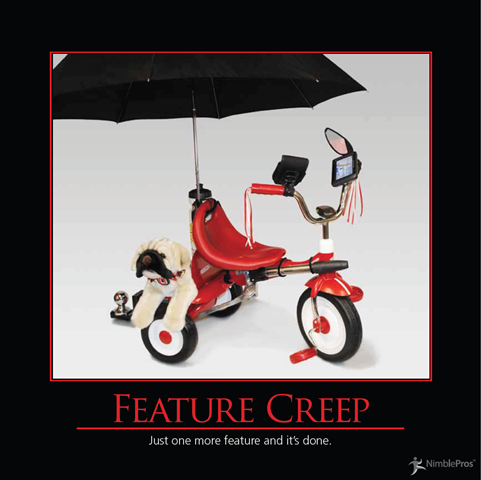 Once the airbag, rocket boosters, seat belts, and parachute are added to this bike it will be done. Oh. And an ejector seat. We also need to add spokes, so I can put a baseball card in them. We need a bell too. And a horn. It won’t take long to paint it blue will it? Can we add padding to the seat? That’s the last feature. I promise. Oh I forgot about the mud flaps. Once that’s done we can ship it. As long as there are pegs on the back for passengers.