I think you can guess based on my wording of those two options, that I prefer working as a team toward a combined goal. By working together, we can accomplish much more. We must be careful along the way, however, to make sure that we don’t do anything that can hurt the teams abilities to work as a team.

Building a good, cohesive team is my greatest achievement in my software development career. Being a part of this team as it achieves great things is what I have received in return. – Brendan Enrick (March, 19, 2012)

Building strong teams requires a lot of work. This post focuses on considerations that I believe are important to creating strong teams. These considerations include: communication, co-location, combined interest, respect, and commitment consensus. I focus on these when trying to create good, cohesive teams.

It’s important for the whole team to be talking, writing, documenting, and sharing their ideas. Make sure that your team feels safe working together and communicating with each other.

Communication is so obvious as an important aspect of a good team, that I am not going to spend a great deal of time discussing it.

There is no easier way of getting a team to work together than to have them located together. Keeping the team close together keeps communication high. Not only does this mean that asked questions will be answered quickly, it also means that questions will be asked. If the team were not together, someone might not have asked the question. This keeps the communication barrier low and the feedback loop short.

I said this was an easy thing to achieve, and it can be. Sometimes there are difficulties with logistics of your space, people not wanting to move, etc. These can happen and can also be worked through. If you don’t have a team room, you can still set up a “command center” in an unused conference room.

I’ve seen both introverts and extroverts do well in co-located teams. When the conversation is on-topic it allows everyone to tune in to what the team is doing. The team will start answering questions immediately, knowing what everyone else is working on, chiming in with assistance on an area of expertise. 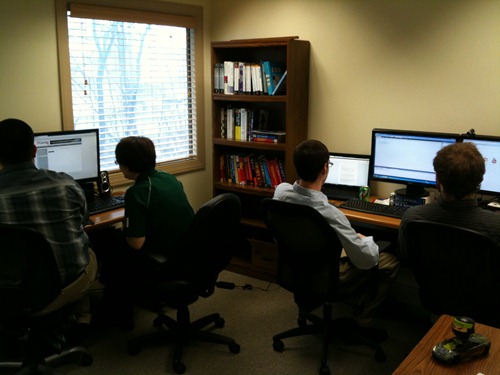 It’s extremely important that a team have a shared goal. If you fragment the goals of your “team”, you will be fragmenting the “team”. You run the risk that the team will have no incentive to work together. Yes, you might say that since everyone gets along, they’ll work together still, but you’re driving in a wedge that will pull them apart.

I don’t want my team to have individual goals, this will cause them to work on their own and make it harder for them to work together. Anyone spending their time helping someone else would be in danger of not finishing their own work, but I want them working together to achieve more.

Nothing is as detrimental to a team than making them behave less like a team.

By combining the goals and interests of the team, you force them to work together. They get the idea that they’re being graded together and being rewarded together. This will keep everyone on the team at  their most productive, because they will all have each other to lean on.

When the team has respect for each other, they will strive to not hinder the rest of the team. This means that they will try not to break the code base. They will try to make sure that they build good, simple designs that everyone can appreciate. And communication will also flourish.

When the team has respect for themselves and the code they’re writing, they will strive to write clean, simple, well-tested code. The team will care about the work they’re doing and will avoid creating a big messy codebase.

Making any commitment as a team must be done with a consensus among the group. One of the worst things that can be done to a team is to set their commitments for them. You can’t tell someone else what they are required to commit to.

Commitments have to be made willingly or the commitment might as well not be made at all.

This mistake is commonly made by people assigning work for the team to work on without getting their feedback on it. If you assume that a team can get X amount of work done without asking them, you’re asking for trouble. First, you’re making their decisions for them. This is going to make you into the opposition of the team. Second, you’re not soliciting their opinions or feedback.

Often this means that someone who is not going to be doing the work has estimated the time the work will take to complete and has assigned this work to individual team members. This will break the combined interest, encourage the team to break from their co-location, and cause the team to feel the person making those decisions isn’t taking them into consideration.

Getting people together, working together, collaborating, is what makes teams effective. Don’t try to force them into doing something they don’t want to do. It will backfire on you. Plus, they’re likely not going to uphold that commitment. It wasn’t their commitment anyway. Not really.

If you manage to get the team working together effectively, keep it up. Try new things, but don’t let it destroy the team. If it looks like it’s hampering the team’s togetherness, quit doing it. Find another way of doing whatever you’re doing.

Don’t force the team into processes they don’t like. Let them create a process that works for them. Give them the tools and enable the team to make the right choices. Empower your team! Make sure that you never become the opposition of the team. Try to be part of the team. Align your interests with theirs.