Programmers are talented, smart, skilled professionals. We put in lots of our own effort to educate ourselves and stay up on current technologies. We work hard and we feel great satisfaction in our achievements. We donate our time to charities when the opportunity arises. We give back to our local communities. All things considered, there are a lot of really great programmers in the world.

A team that really meshes and works well together doesn’t let egos get in the way. It doesn’t matter if you’re a rock star developer. When you’re on the team, you’re part of the team. You might be the JavaScript expert, the master of SQL queries, or the guy who can refactor anything. When you’re part of the team, you should try to use your strength, but don’t let that interfere with the team’s flow. 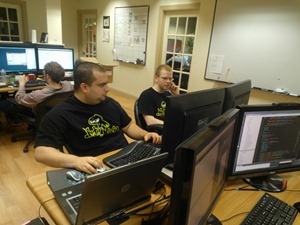 Sometimes it makes sense for a more experience developer to work with a less experienced developer. A common first instinct is that the senior person is mentoring the junior person, but it’s actually going both ways.

Each of the two developers is bringing a lot to the table. Their different experiences and views allow them to each approach the problems differently, ask different questions, and apply different, existing knowledge.

If either person’s ego gets in the way, it would prevent the 2-way knowledge transfer in addition to creating friction between them.